Download the PDF version of this One Water Spotlight here.

And how does that filtered, decontaminated, and disinfected sewage taste?

The sparkling H20 came from the $72 million Silicon Valley Advanced Water Purification Center, opened in July 2014. Although water from the plant is used strictly for non-drinking purposes such as landscaping and industrial cooling, the Santa Clara Valley Water District hopes to eventually mix it with groundwater and pipe it to customers for drinking.

The Silicon Valley Advanced Water Purification Center marks an important step toward advancing “one water”solutions in a region renowned for innovation. Diversifying local water resources, integrating systems to maximize water quantity and quality, delivering projects that provide multiple benefits, and doing it all through partnerships are key elements of the one water approach. They also are hallmarks of the Santa Clara Valley Water District’s holistic, forward-looking approach to water resource management and stewardship.

“We are the primary water resources agency for all of Silicon Valley, so it’s our job to manage and plan for current and future water needs to ensure our region’s sustainability,” said Barbara Keegan, the water district’s board chair.  “This includes not just managing the day-to-day water needs for Silicon Valley’s residents, businesses, and environment, but also investing in innovative technologies and long-range planning for the region’s water needs. By taking a comprehensive, integrated approach to this vital resource, we can protect and preserve it for the benefit of both current and future generations, as well as our valley’s environment.”

There are endless uses for water. The challenge is, there isn’t an endless supply.

Most of the farms have long since been replaced by companies like HP, Apple, and Google, but the tradition of careful management and stewardship continues. The water district recently launched a master planning process to coordinate  and align long-term plans for all five watershed areas across the county. Central to that process is stakeholder engagement. The agency is enlisting representatives from communities, academia, business, environmental and conservation  organizations, municipal government, tribal governments, policy groups and many others to take part in designing coordinated activities at a watershed scale to maximize the water supply, adapt to rising sea levels and changing weather  patterns, and support robust communities and ecosystems.

And that’s not the only example of broad engagement in local water resource planning and management. In 2000 and again in 2012, voters approved a special parcel tax for water investments—in the latest instance by an overwhelming 74  percent. The original measure restricted funding to creek restoration and flood protection. The newer measure, crafted through a two-year process with input from thousands of people and numerous stakeholders, takes a more  comprehensive approach.

Expected to raise more than $500 million over the next 15 years, the tax funds scores of projects— from a massive seismic retrofit of the water district’s largest reservoir to the installation of hydration stations in schools. Flood protection  remains a priority, with investments in green infrastructure, novel levee design, and ecotones, an innovative and environmentally friendly shoreline area that transitions between land and aquatic environments.

The tax also supports habitat protection, cleanup of polluted waterways, and other improvements that enhance the natural environment, the local economy, and quality of life. Many of these projects are run by community partners, through  grants from the water district. One program trains low-income youth to be environmental leaders and educators. Another hires homeless people to clean up trash-choked creeks. 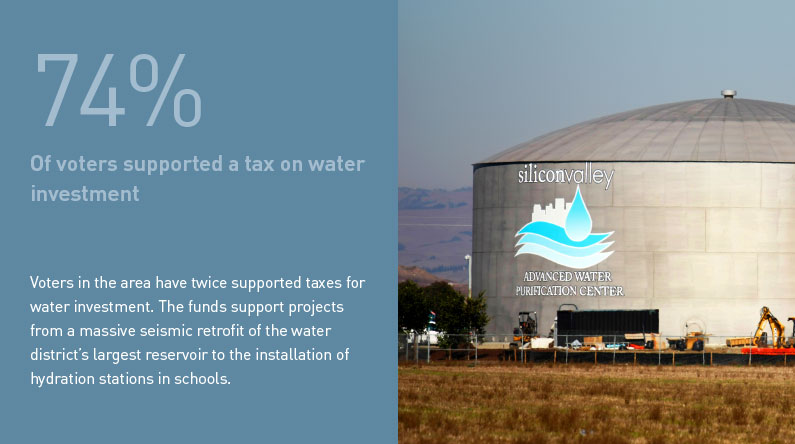 Partnerships also were instrumental in building the advanced water purification center. Although the water district financed most of the project, it received $8.25 million from the federal American Recovery and Reinvestment Act and $5.25 million from the California Department of Water Resources. The city of San Jose contributed $11 million to construction and provided a long-term land lease. The Silicon Valley Leadership Group played a pivotal role in lining up partners and funding. The global firm Black & Veatch served as the lead consultant on design and construction.

“There are endless uses for water. The challenge is, there isn’t an endless supply,” said Cindy Wallis-Lage, president of Black & Veatch’s Global Water Business. “The Santa Clara Valley Water District and the City of San Jose are true one water leaders. We are proud to have worked alongside them on a project that is as innovative and impactful as its namesake region.”

The facility takes water that has already gone through two levels of wastewater treatment and puts it through three additional high-tech cleansing processes—micro-filtration, reverse osmosis, and ultraviolet light disinfection. Instead of winding up in the bay, the water is distributed through the regional recycled water system, which serves approximately 750 industrial and municipal customers. Compared with standard recycled water, the enhanced variety has lower levels of dissolved solids, so it reduces chemical and maintenance costs for users. The water also has less salt so it’s easier on plants.

But the end game isn’t simply to make better recycled water for customers who already buy it. The goal is to vastly expand its potential use, including adding it to drinking water. Before the plant came online, recycled water made up about 5 percent of the county’s total water demands. The plant will double that figure.

Expanding recycled water from 5% to 20%

The water district wants to get to 20 percent recycled water within a decade. That would require a $900 million expansion of recycling capacity. More > The water district wants to get to 20 percent within a decade. That would require a $900 million expansion of recycling capacity. It also requires extensive state regulatory review, since California still is developing guidelines for mixing recycled water with groundwater. One exception to this is Orange County in southern California, where purified recycled water has been injected into groundwater and delivered for drinking for seven years.

To move the project forward, the water district has embarked on a vigorous public education campaign. The purified water facility has generated local interest and excitement—tours are packed, and open houses draw hundreds of people, from parents with babies in strollers to seniors.

Still, it’s one thing to embrace recycled water at the car wash; it’s another thing to contemplate pouring it into the water glasses at the family dinner table.

That is why two Silicon Valley mayors and other local leaders stood in the sunshine on a spring afternoon and lifted glass beakers with purified water. One, two, three, they counted as video rolled. Then, in unison, they guzzled the clear, pure water.