Download the PDF of this One Water Spotlight here.

Owned and operated by the Metropolitan Water Reclamation District of Greater Chicago (MWRD), the Stickney WRP in Cicero, Ill., serves 2.3 million people in a 260-square-mile area, including the central part of Chicago and 46 suburban communities. The Stickney WRP itself encompasses 413 acres and is home to nearly 400 employees who oversee the treatment of up to 1 million gallons of water per minute, the equivalent of pumping two Olympic-size swimming pools. On average, Stickney cleans 700 million gallons of water per day, with the capacity to treat up to 1.44 billion gallons per day.

Stickney is so large it actually consists of two plants: the west side was put in service in 1930, followed by the southwest side in 1939. Over the last 86 years, the plant has seen its fair share of evolving equipment and technology. Today, past its coarse filtration screens and amid the aeration tanks and settling tanks, Stickney holds scores of labs and offices. Train systems transport solids from one end of the facility to another, as crews pot tree saplings in a biosolids compost blend recovered from the water treatment process. 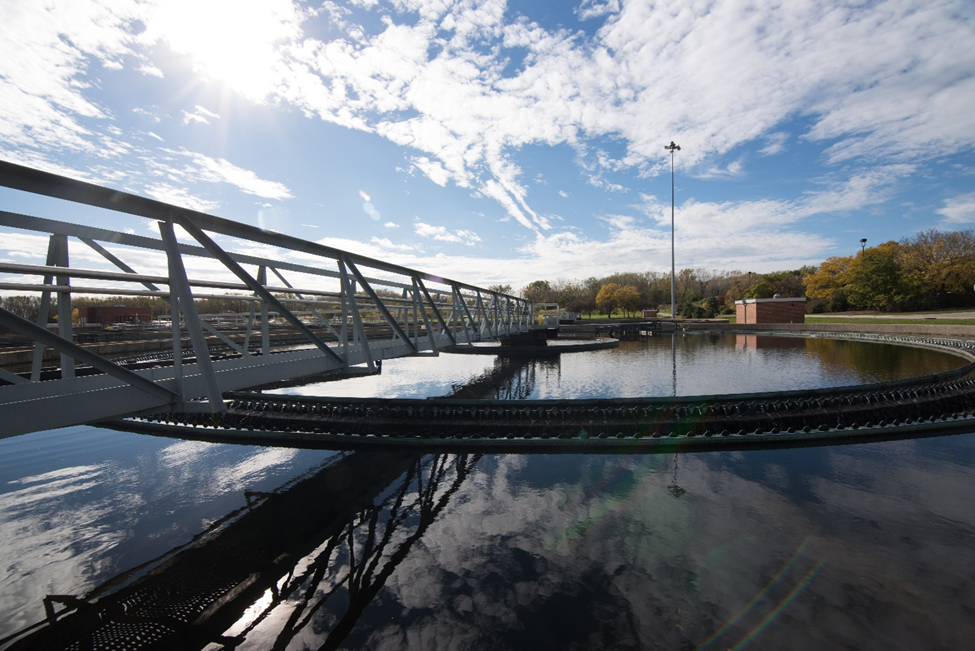 Water enters settling tanks at Stickney Water Reclamation Plant in Cicero, Ill., where remaining solids settle to the bottom and clean water flows out the top. Stickney can treat as much as 1.44 billion gallons per day, accepting wastewater from the central part of Chicago as well as 46 other communities within a 260-square-mile-area. It only takes 12 hours for wastewater to be converted from raw sewage to clean water. The same transformation would require several weeks in a natural waterway.

Stickney has the water sector buzzing with its latest recovered resource project. In May of 2016, MWRD officials and partners officially unveiled the nutrient recovery facility that will remove phosphorus and nitrogen from the wastewater stream to create 10,000 tons of high-value fertilizer annually. The MWRD partnered with Vancouver, B.C.-based Ostara Nutrient Recovery Technologies to design and build the facility with its three mega-sized reactors that recover more than 85 percent of the phosphorus and up to 15 percent of the nitrogen from wastewater streams before they can accumulate in pipes and equipment, slowing the flow of sludge.

“To see the largest wastewater treatment facility in the world implement Ostara’s system is proof to municipalities there exists a viable and cost-effective solution to address their nutrient challenges.  Having a solution to solve plant issues while addressing more global challenges affecting the nation’s watersheds, without economic burden, is progress for the environment, ratepayers, and future generations.”

By removing phosphorus from the water and returning it to farmers and other agricultural producers, this facility represents a significant shift in the wastewater industry from treatment to recovery for reuse.

MWRD’s new nutrient recovery facility is an example of how progressive technology can be implemented to transform a wastewater treatment facility into a resource recovery center. Because excessive nutrients in our waterways is one of the biggest water and environmental challenges in the country, the Stickney WRP project will provide significant environmental benefits to the greater Chicago Watershed and downstream to the Mississippi River and the Gulf of Mexico. The fertilizer byproduct is both economically and environmentally viable.

"The MWRD is dedicated to becoming the utility of the future," said MWRD President Mariyana Spyropoulos. "Ostara’s technology is a solution to managing the overabundance of phosphorus while creating a revenue stream through the sale of the fertilizer. This is a win for the environment and a win for Cook County taxpayers."

The MWRD voluntarily took on this project because nutrient pollution is among the biggest environmental problems of the 21st century. Excess phosphorus in waterways can cause algae to grow and bloom, creating toxic conditions that destroy aquatic life and severely limit recreational enjoyment of lakes and rivers. Phosphorus is considered a major contributor to nutrient pollution, entering bodies of water from a number of sources including urban water treatment facilities. The MWRD’s nutrient recovery facility will greatly reduce its nutrient effluent load.

While the impact of reduced phosphorous flow downstream to the Gulf is felt nationally, it is the local product that is a hot topic of conversation in Chicago, where river walks are being constructed and recreational use of the Chicago River and area waterways has skyrocketed in recent years. Cleaned water from Stickney is released into the Chicago Sanitary and Ship Canal southwest of the Chicago River. Taking proactive steps in protecting the local watershed, therefore, is a priority for the MWRD and the greater Chicago community.

“Thanks to critical partnerships like this, the Chicago region is a global leader in driving water technology and innovation forward,” said Chicago Deputy Mayor Steve Koch. “This new facility will keep that progress going while benefiting Chicago’s environment and residents.” 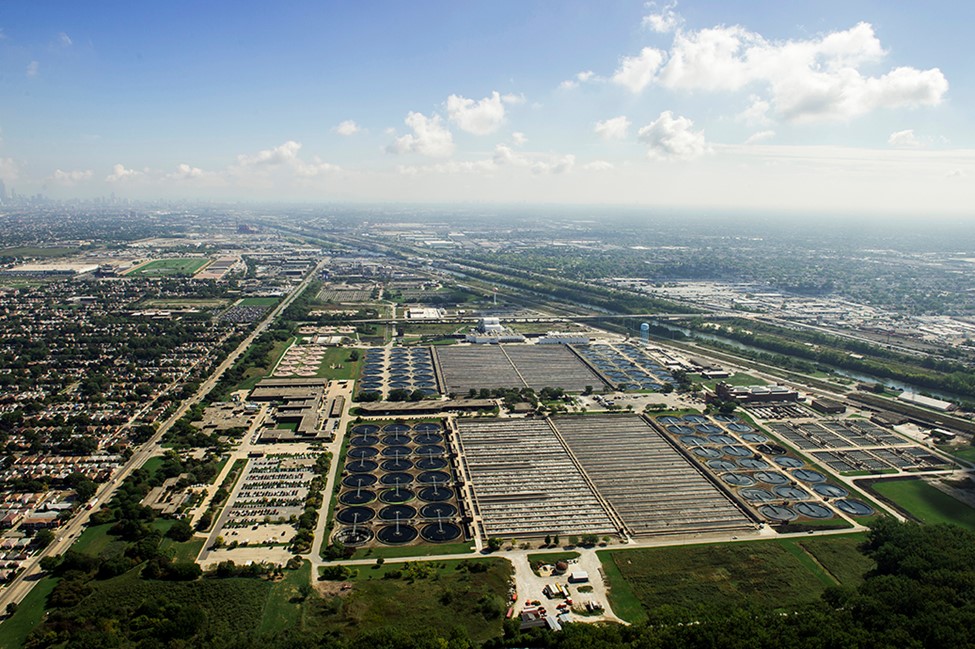 The Metropolitan Water Reclamation District of Greater Chicago’s (MWRD) Stickney Water Reclamation Plant in Cicero, Ill. houses 190 buildings over 413 acres, including a new nutrient recovery facility. At right and in the background is the Chicago Sanitary and Shipping Canal, which receives the treated water after it has been cleaned at Stickney. The MWRD owns and operates the canal after building it in the late 19th century as part of its plan to reverse the flow of the Chicago River away from Lake Michigan to protect the region’s drinking water supply.

From the time raw sewage enters the plant, it takes about 12 hours to process, clean, and release treated water. The process has evolved since the MWRD was formed in 1889 as the Sanitary District of Chicago. From that first call to eliminate pollution in Lake Michigan, the source of the area's drinking water, the mission of the MWRD has since expanded. MWRD now also aims to protect and clean the water environment, and, beginning with Stickney, will recover critical resources from what was previously considered waste. In addition to the nutrient recovery program, the MWRD is also pursuing reuse applications for the high qual­ity water produced at Stickney WRP. By delivering this treated water to the industrial sector, the MWRD has found a way to rely less on Lake Michigan’s precious waters while building partnerships to leverage funds. 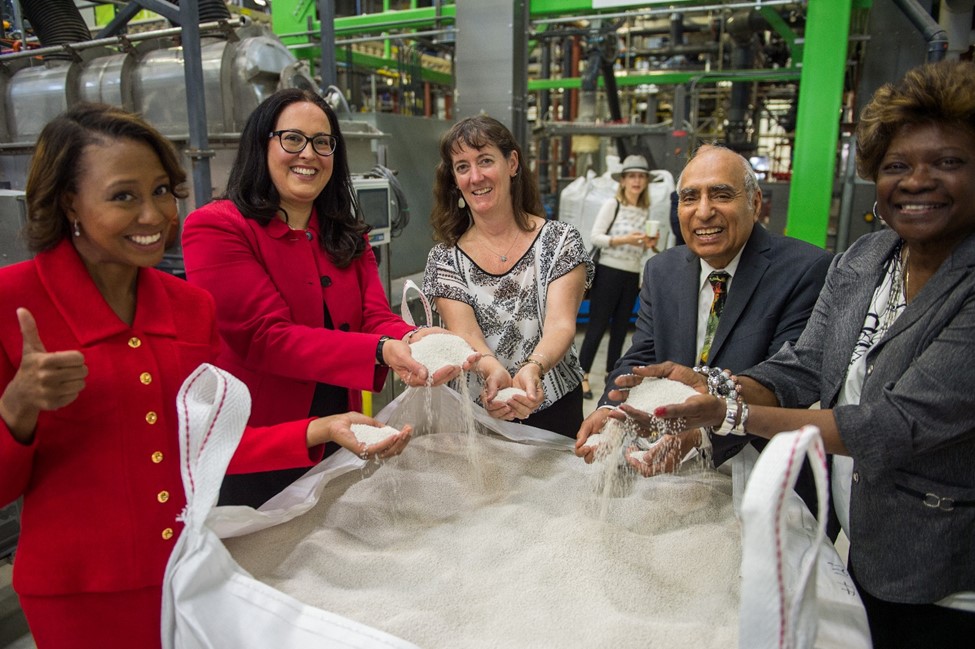 Phosphorus recovered from the wastewater stream is converted into a high quality, slow-release form, which can be sold in stores and used in fertilizers. Marketed as Crystal Green, the recovered fertilizer will provide revenue to the MWRD per each ton produced for distribution. The MWRD expects to produce 10,000 tons of Crystal Green annually. Phosphorus, a non-renewable resource essential for life, is estimated to be gone from reserves within the century.

Simultaneously, the MWRD is removing solids during the water treatment process and transporting them to temperature-controlled digesters at the Stickney WRP; the digesters break the solids down in a process similar to composting that converts nutrients into forms that kill pathogens and provide beneficial use to plants. The solids are then dewatered in a centrifuge and air-dried nearby, resulting in biosolids that look and feel like dark, fine-textured topsoil. Composted with wood chips, the biosolids resemble commercial composts sold in retail stores but are richer in plant nutrients and perform better as a growing medium than commercial compost and fertilizer. Both the air-dried and composted biosolids could be used almost anywhere topsoil and chemical fertilizers are used, but are particularly popular locally at golf courses, agricultural fields, athletic fields, parks, and other recreational areas. They are also distributed with MWRD oak tree saplings. Restoring the region’s urban canopy serves the dual purpose of neighborhood beautification as well as stormwater management. The root systems of the trees help to contain excess stormwater, mitigate flooding, and improve area water quality.

By placing a critical eye on the bottom line, the MWRD’s Stickney WRP has learned how to simultaneously protect taxpayers and the environment.