Kansas City is a sprawling city, covering more than 300 square miles.  To serve its vast customer base of almost half a million residents, KC Water maintains over 2,800 miles of water main – enough to stretch from New York City to Los Angeles.

Kansas City sits on clay soil, which swells and shrinks during extreme weather conditions.  The record-breaking heat of 2012 exposed Kansas City’s outdated and long-neglected water infrastructure.  The contracting soil burst almost two thousand water mains that year – some of which had originally been installed in the late 1800’s.

The 1,844 water main breaks in 2012 was an all-time record for Kansas City – an average of just over five per day.  The greatest number of water main breaks occurred during the hot and dry month of August.  There were 317 breaks that month – over ten per day. 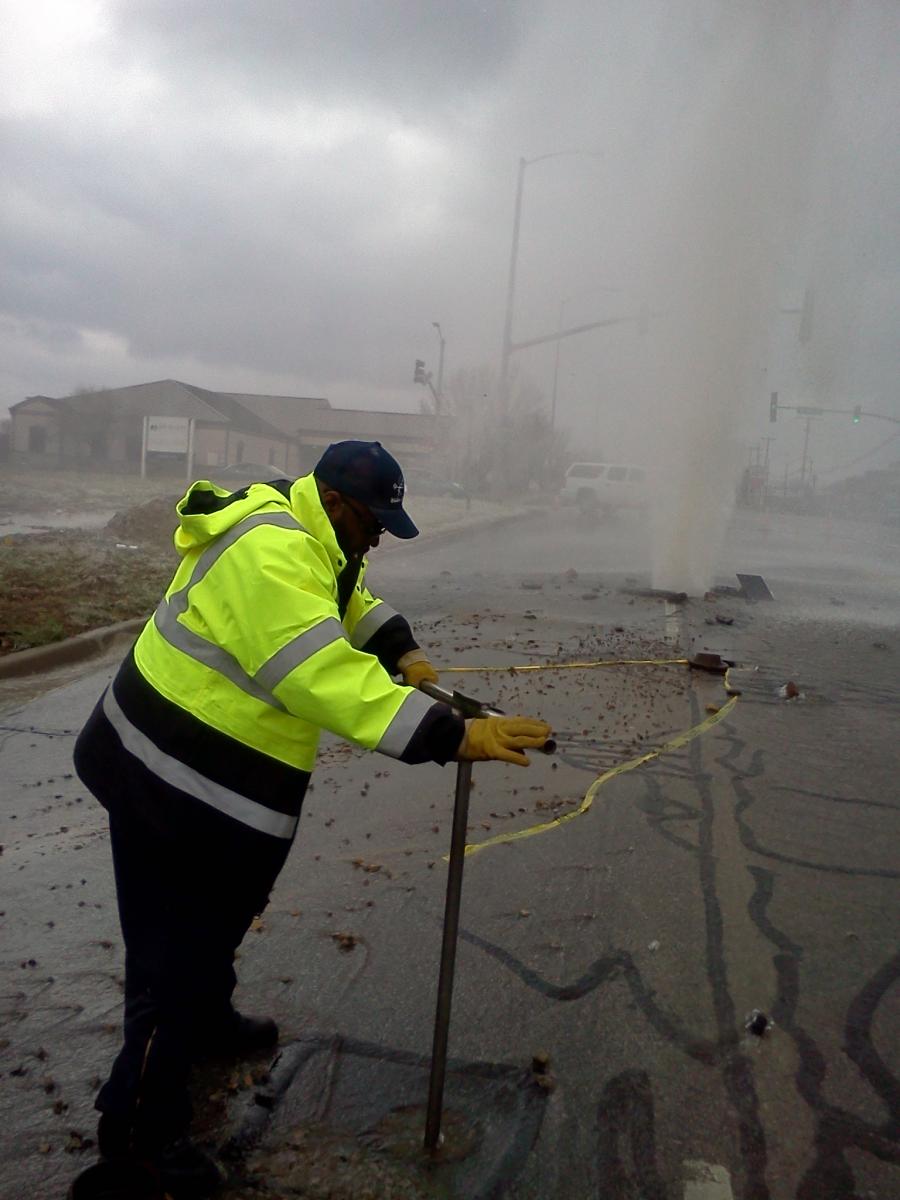 The extreme events of 2012 made it clear that something had to be done.  KC Water’s customers were frustrated with service disruptions, and KC Water’s leadership was concerned about system integrity and the cost of unrealized revenue due to the millions of gallons of water lost through main breaks.  Unfortunately, the federal and state levels of government were not viable assistance options; KC Water was going to have to chart its own course.  But, with over 2,800 miles of pipe, where should KC Water even begin?

KC Water started by hiring local engineering firm Black & Veatch, who analyzed and mapped the entire water distribution system – identifying over 70,900 individual line segments.  Line segments were first identified by their physical characteristics. The analysis included detailing the age of the entire system, where most of the breaks came from, and revealed what material of pipe was most likely to break. They then identified lines that served critical and priority customers, such as hospitals or schools, lines that had a history of frequent breaks, what lines were under grey or green infrastructure – therefore impacting the difficulty of replacement, and the proximity to major transportation routes.

We started this effort in 2012, and it’s part of the promise we made to residents of Kansas City.  If they approved a $500 million water revenue bond authorization, we would start fixing the infrastructure.  That’s what we’re doing; we’re showing progress.

This detailed and comprehensive analysis enabled the creation of a system-wide heat map, which assigned a color to all 70,900 line segments.  Each line segment was graded and assigned one of nine colors which reflected a line segment’s “probability of failure” and “consequence of failure.”  Prioritizing water main replacements based on these two critical factors enabled KC Water to implement a data-driven strategy aimed at first tackling the worst of the worst water mains.

With a plan in place, and support from the Mayor, City Council, and City Manager, KC Water was able to increase rates and get voters’ authorization for the sale of low-interest municipal revenue bonds.  This funding made it possible to implement a one percent replacement plan – proactively replacing 28 miles of the 2,800-mile system annually.  Using ductile iron pipe, which has a project life expectancy of 100 years, every line segment will be replaced each century. 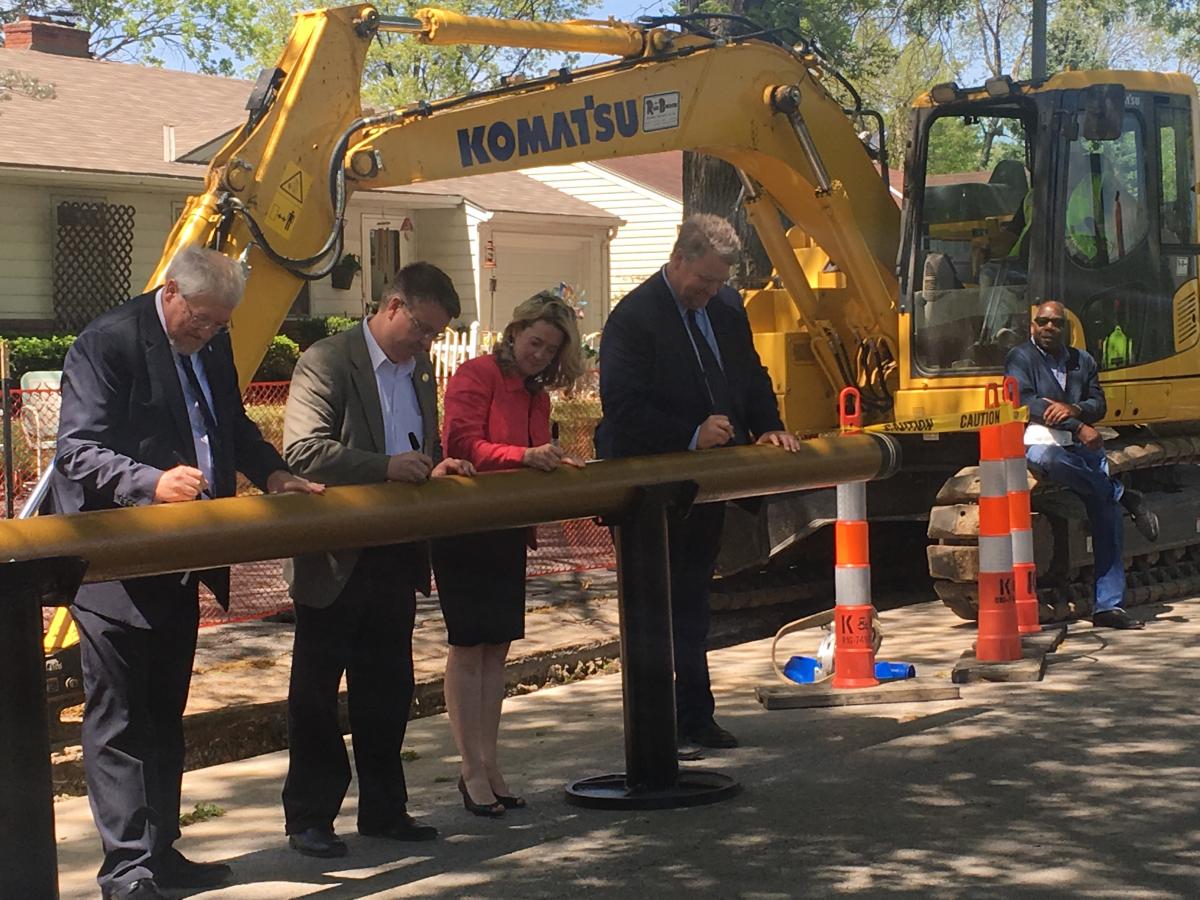 “We started this effort in 2012, and it’s part of the promise we made to residents of Kansas City.  If they approved a $500 million water revenue bond authorization, we would start fixing the infrastructure.  That’s what we’re doing; we’re showing progress.” said Kansas City, Missouri City Manager Troy Schulte.

Since implementation in 2012, KC Water’s strategic and data-driven Water Main Replacement Program achieved positive results. In 2017, KC Water celebrated the installation of the 100th mile of new water main and the number of water main breaks declined 60 percent since 2012. Strategic investment in the worst line segments has resulted in a 44 percent decrease in the number of miles of break-prone and potentially costly pipes that are in service. KC Water successfully enhanced the integrity of its system while saving over $21.6 million in potential repairs since 2012. 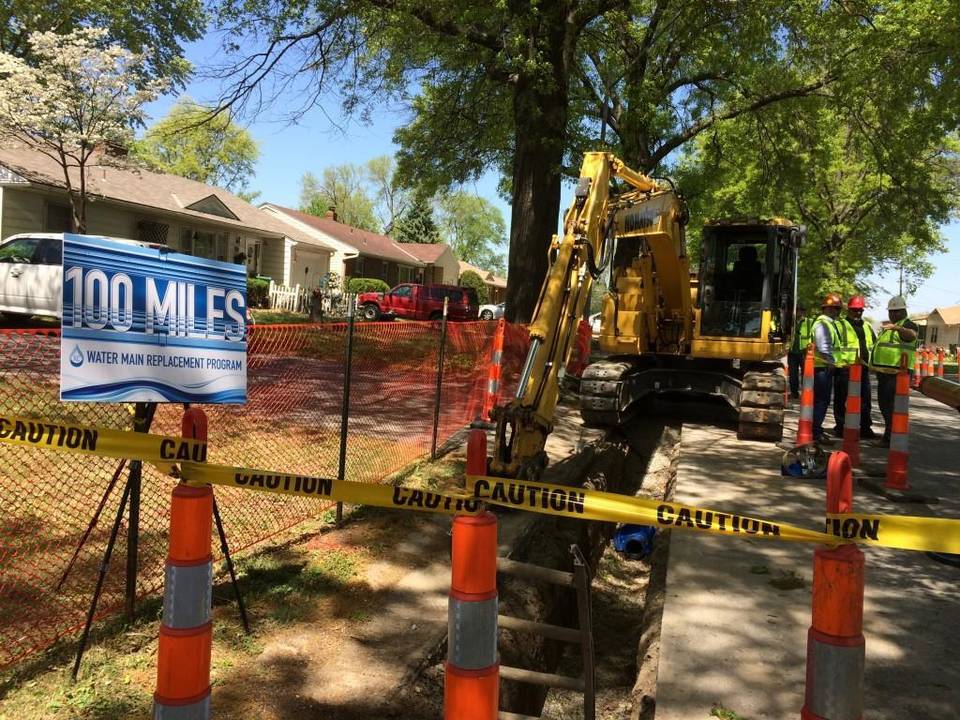 KC Water celebrates the installation of the 100th mile of new water main as part of its Water Main Replacement Program.

“It’s great to measure our progress and to recognize all the hard work that went into this program,” said KC Water Director Terry Leeds.  “We look forward to many years of ongoing water main replacement to protect the public health and safety of our customers now and in the future.”

However, this progress doesn’t come without a cost, and Kansas City is not unique among cities across the country.  According to Circle of Blue, the nation’s average monthly residential water bill has increased by 50 percent since 2010 – far outpacing any increase in income.  In addition, a 2017 study funded by the National Science Foundation estimates water bills for nearly 41 million households nationwide will soon meet the United States Environmental Protection Agency’s definition of “unaffordable.”  Low-income ratepayers across the country are particularly affected by rising rates, causing many to make difficult decisions between paying water bills and paying for food/medical needs.

We look forward to many years of ongoing water main replacement to protect the public health and safety of our customers now and in the future.

Despite the fact that Kansas City voters and ratepayers have historically supported water infrastructure investment, KC Water worries about the issue of rate fatigue, and the impact that rising rates can have on those who can least afford it.  That is why KC Water created a needs-based customer assistance program, which helps those customers who are having trouble paying their monthly bill.  Because Missouri law prohibits the subsidization of water rates, this program is funded by late penalties, fees, and other non-rate revenues.

“As an organization who helps low-income individuals, water bills weren’t even on our radar ten years ago,” said, John Rich, Executive Director of the Mid America Assistance Coalition – the nonprofit that administers KC Water’s customer assistance program.  “Unfortunately, water rates have risen to pay for neglected infrastructure and unfunded federal mandates, which has created a genuine need for water utility billing assistance.  We’re thankful for KC Water’s foresight in creating a customer assistance program, but we’re hopeful the federal government, as it has with electric and gas utility bill pay assistance, will step up when it comes to helping low-income individuals pay their water utility bills.”