The Austin Central Library in Austin, Texas has gotten its fair share of hype – so much hype, in fact, that it was included on the Time’s 2018 list of the World’s 100 Greatest Places. And while its rooftop garden, Tetris-like stairways, elevated walkways and collection of 500,000 books are certainly awe-worthy, it’s something else entirely that has our attention. 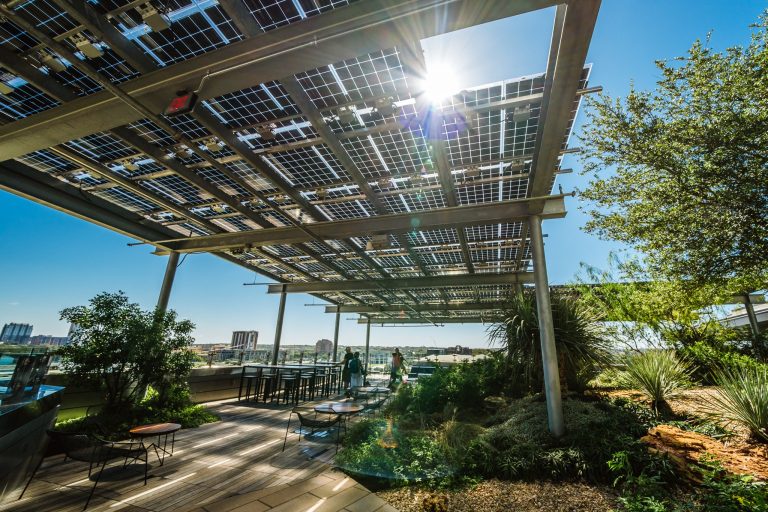 Photo Credit Roger Ho
Behind the scenes, the building’s architecture is more than just aesthetic and basic function. It has a massive water collection and reuse system that makes the library a truly innovative One Water success story, as well an awardee of the highest possible green building certification.
One Water is a water planning and management approach that rethinks how water moves through and is used in a community; it brings stakeholders like developers, community leaders, urban planners, water managers and engineers together with the goal of utilizing water as thoughtfully and efficiently as possible. While One Water is typically talked about on a community scale, individual buildings and institutions can adopt its tenets and pave the way for wider adoption of One Water principles. The Austin Central Library gives us a glimpse of what buildings in One Water communities should aspire towards.
How does Austin Central Library’s water system work?
The Austin Central Library uses strategies called rainwater capture, condensate reuse and reclaimed water to make the most of precious water resources in a drought-prone and quickly-growing urban center. What that means is that the library collects both rainwater and the water that drips off of air conditioning systems, and then it uses that water again to irrigate the library’s landscaping and to flush its toilets and urinals. Reclaimed water is used as a back-up supply to in case rainwater and air conditioning condensate are not available.
Here’s a closer look at how those strategies come together at the library:
Outdoor watering for lawns and gardens typically uses large amounts of clean drinking water, leaving less water available for drinking and for rivers and wildlife. By tapping into underutilized sources like rainwater and A/C condensate to meet these watering needs, the Austin Central Library sets itself up for self-sufficiency and leaves more water in Austin’s lakes and streams and the Colorado River.
What can other One Water teams learn from the Austin Central Library?
While there are many considerations that go into creating a One Water building or system, perhaps the most crucial to the project’s success is putting together the right team.
Rainwater harvesting was always going to be a part of the Austin Central Library design. However, the team realized early on that the library’s planned location would let them do much more than simply harvest rainwater, and the systems grew from there. This evolution was only possible because the team that was involved from the start had an understanding of the possibilities and were curious and interested enough in creating a truly sustainable building to pursue these ideas.
Individuals involved in the Austin Central Library’s water management process have emphasized that the make-up and engagement of the full team, all the way from design to operation, has been critical to the library’s success. Austin Water’s conservation team provided support throughout the library’s design and construction process with the facility’s management team invested both personally and professionally in sustainability. In particular, individuals associated with the library’s team have commented on the importance of an operations manager who is personally invested in the mission and is well qualified to handle the systems involved in water harvesting and onsite reuse.
Understandably, the Austin Central Library has benefited from its access to highly qualified, invested and LEED-certified individuals. Not every community or One Water group will enjoy these same advantages while putting together a project team. In these cases, it may make sense for the first hire to be an onsite reuse consultant or system vendor. While it may seem like those specialties could be inserted later on in the process, the Austin Central Library is a great case study for the benefits of bringing water stakeholders into the discussion at the beginning of the design process and using those perspectives to build these systems into the architecture and personality of the building.
This article originally appeared on the Texas Living Water's Project's site on April 18, 2019.